I registered here just to ask about a Model 30 I recently came across. It belongs to a buddy of mine, so I won't be able to provide any more pictures anytime soon. When we were looking at it, we didn't know what it was as it has no model number, caliber, or serial number markings that we can find. It does have a scope on it though, so we figured those things might be under there. But the bolt and safety rang some bells with me and had some markings, so I took pictures of those. Before any research, we were thinking it was a sporterized and possibly rebarreled (to 30-06) military rifle. When I got back home I found that the bolt and safety looked like they were from an enfield P17, which led me to the remigton and winchester rifles based off of the P17. The stock and everything looks exactly like the Remington model 30, so I figure that's what it is. So I have a couple of questions for the experts. First, what are these markings on the safety and bolt? Second, was it common for some of these rifles to not be marked with serial numbers, calibers, or model numbers? I did not get a picture of where those markings should have been, so you'll have to trust me that I was expecting to find something there on the left side of the receiver and barrel and they were blank. The only reason I didn't take a picture of that side was because there was nothing of note there. Third, could the markings be somewhere else or maybe hidden by blueing? We thought it had been rebarrelled because the blueing is a slightly different color on the barrel than the receiver, but maybe it was just reblued and the parts took the blueing differently.

Any help or insight will be appreciated. Sorry I don't have better pictures. I had no idea what I was looking at.

Edit, well crud, I can't attach the other 2 pictures. I will come back later and try to figure that out.

Here are the other 2 pictures. I have clearly not mastered the art of posting pics on this forum yet. When I tried to upload them from my hard drive, it told me the size could not be determined. So I hosted them and now we'll see if this shows for everyone. If it doesn't, the first 2 are direct links to the pictures. 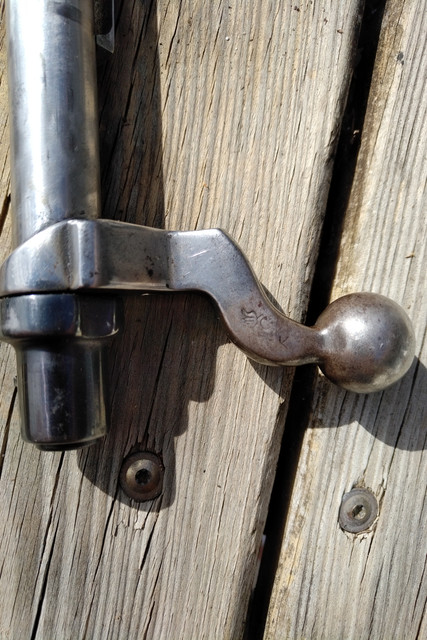 First let me say I'm no expert, but this is my opinion. This is a customized 1917 Enfield military rifle.
This is based on a conversion my father did back in the 50's. The military rifle had markings on top of the front
of the receiver and on the original barrel.The "E" on the safety is an Eddystone mark.
I can't make out the bolt handle marking. If the receiver is original the rear sight would have been milled off,
If it is a model 30 receiver, it should be marked. The stock is defiantly not Remington.
That's my best guess.
ChuckD
Top

Thanks for the response Chuck. Sorry it took so long for me to get back. I checked the next day and the post hadn't been approved yet, then I kind of forgot about it.

The stock sure looks like the mod 30 stocks to me, but it's possible when they sporterized the M1917, they just put a mod 30 stock on it since those were already cut to fit the action. You probably can't tell from the pictures, but the barrel is a different shade of blue. We thought it meant it had been rebarreled or reblued. From what I read about the mod 30, the parts they made post war had a different blueing process, but they used up their surplus parts first. So that might also be a reason they looked like different colors. With no markings on the barrel I couldn't use my normal method for detecting a reblue, namely to look at how crisp the stampings are.

I recently found another rifle a lot like this in a pawn shop, the wood's just not as fancy. On the pawn shop gun you can see the SN on the right side below the scope mounting bracket. SN wasn't there on my friend's gun.
Top

As I remember, there were 2 basic version of the Model 30 but, I can't remember the details.

I traded my 6mm, 660 for it. I have three more of those now but, never found another Model 30 as nice as mine since.

Users browsing this forum: No registered users and 3 guests