Thank you very much. This seems to be a high condition gun
Top

If the gun is absolutely plain with no engraving, just "Remington Arms Co." stamped on the side of the frame it is an A-grade if a Model 1894. Model 1894 serial numbers were in the 100,000 range and often preceded by a P a Remington stock letter. Also perfectly plain was the lower priced Model 1900 with serial numbers in the 300,000 range, and often a stock letter of Q. These were also known as the K-grade.

A Model 1894 B-grade had just a bit of borderline engraving. As the grades went up C-, D-, and E-grade the engraving became more extensive, the stock wood and checkering finer, and the overall workmanship better. There is normally a grade letter stamped on the left side watertable -- 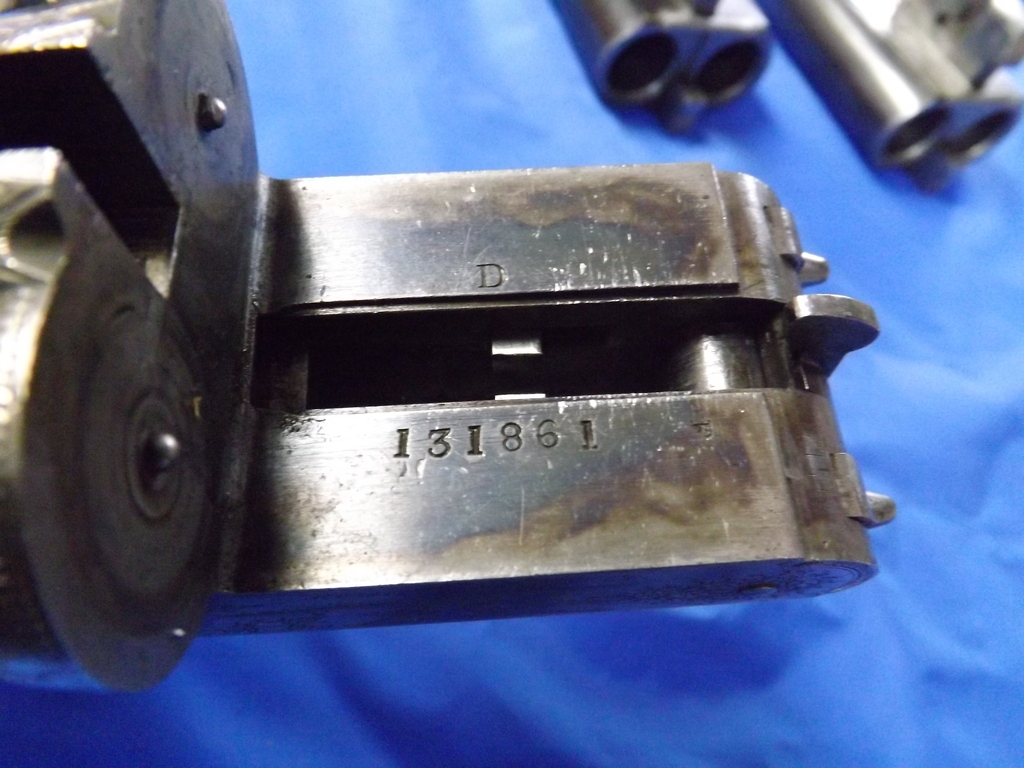 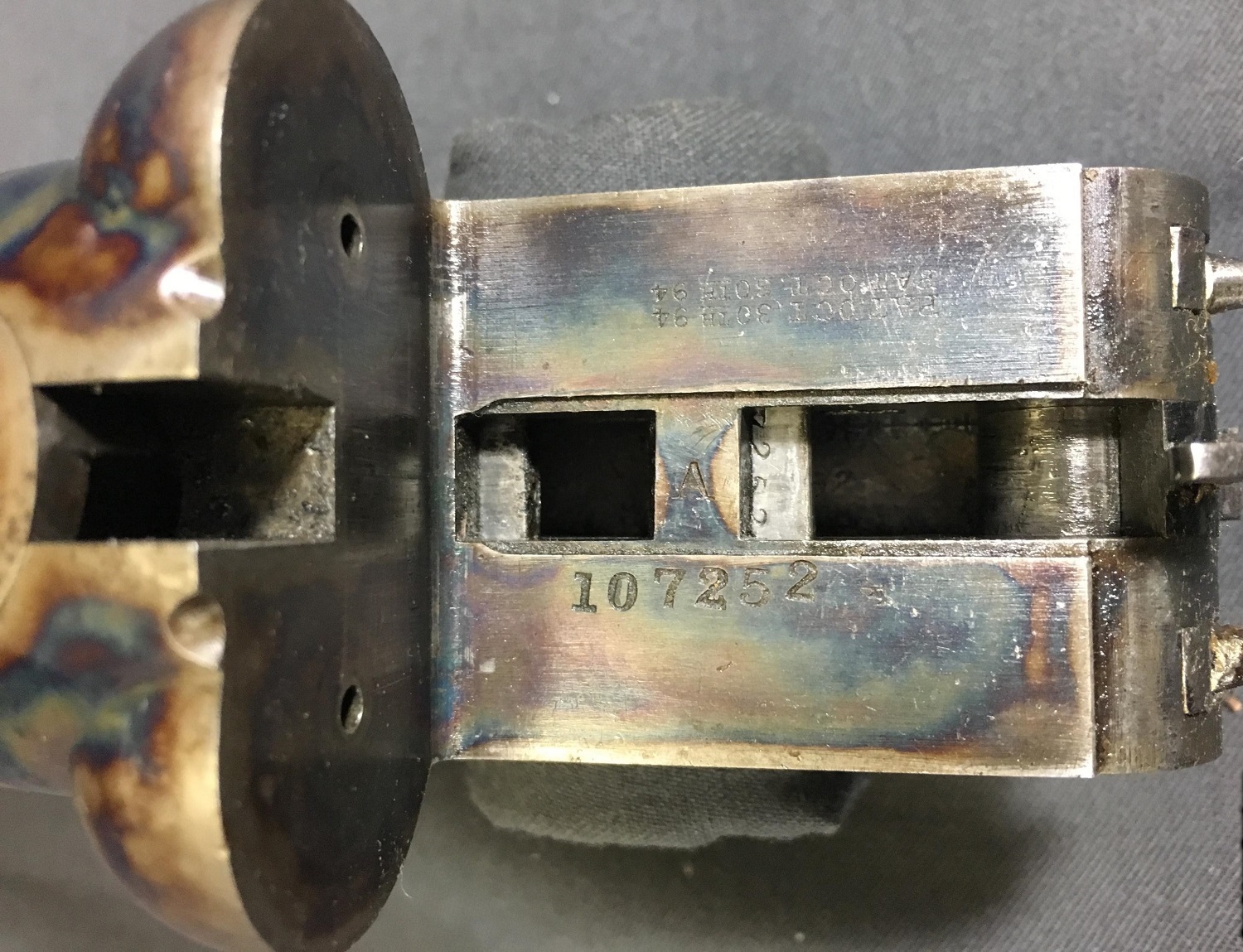 on the bridge. Also, if you remove the trigger guard, the grade letter is often stamped in the wood after the serial number. 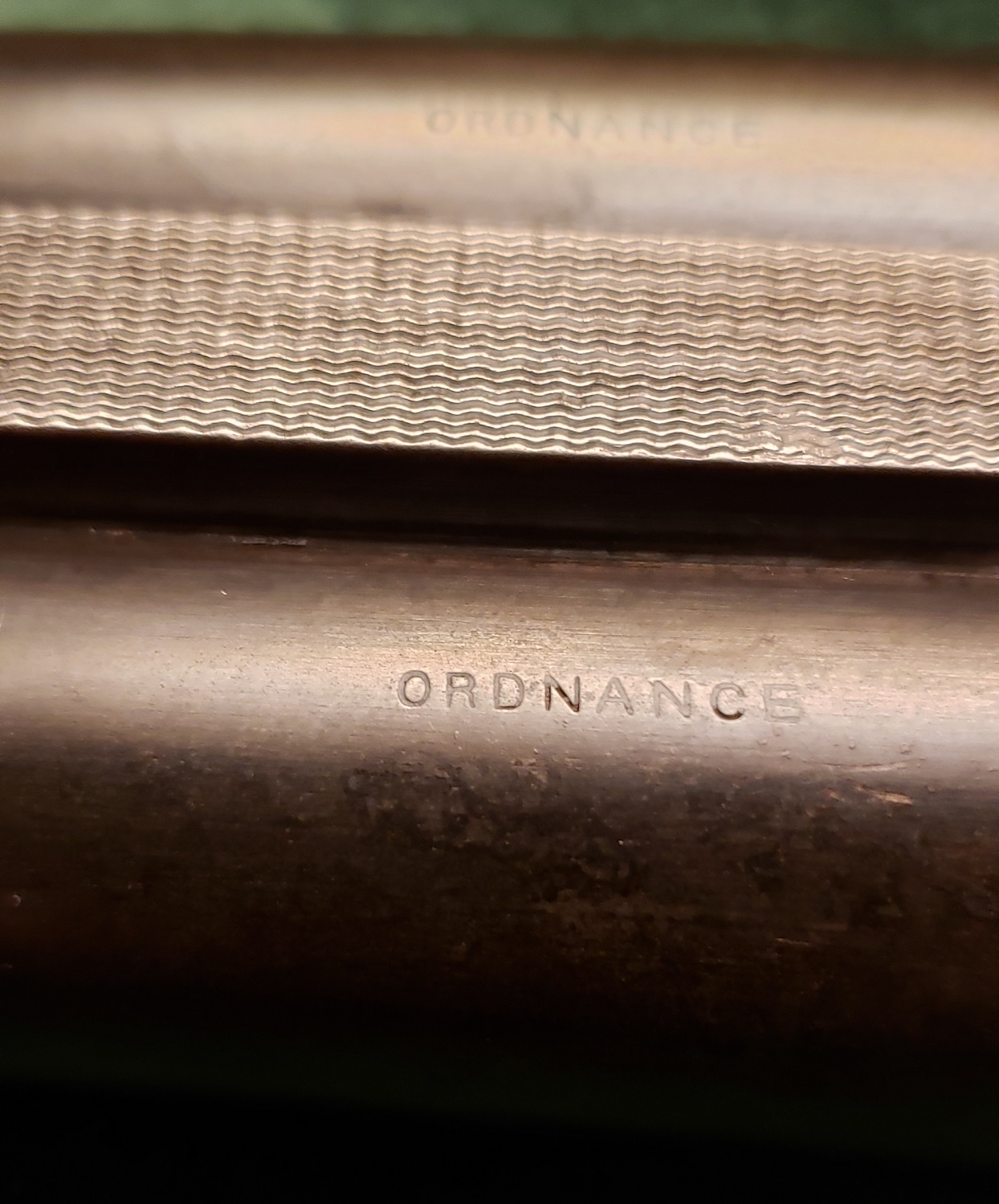 and engraved on higher grades. 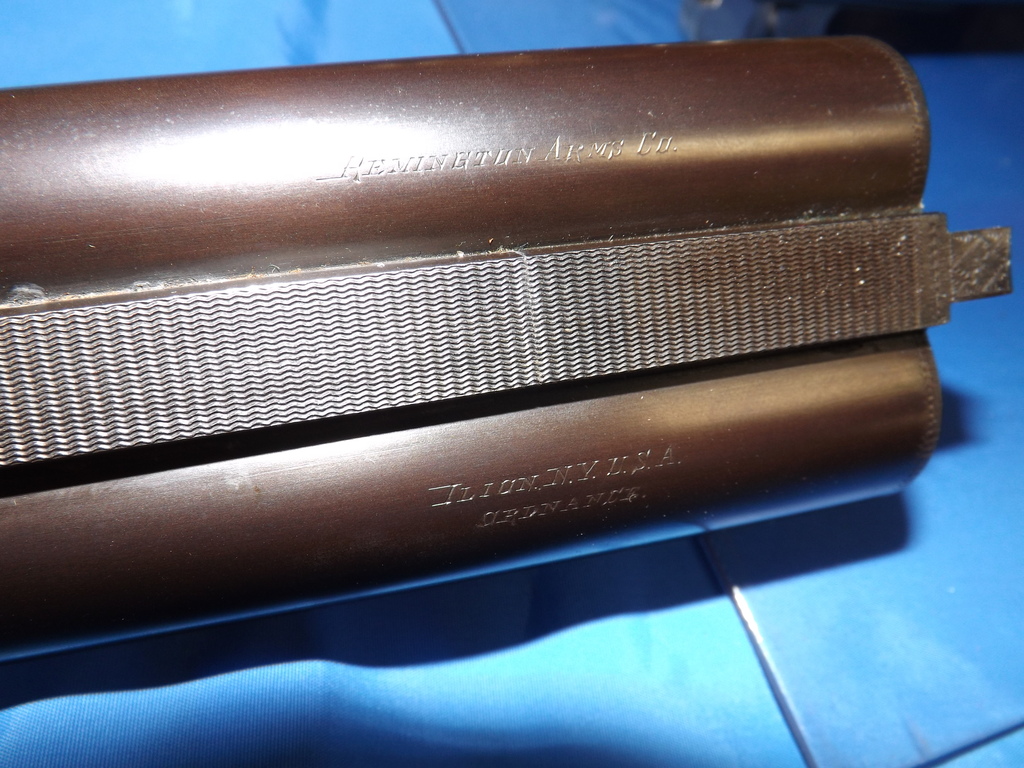 You need to check out the late Charles G. Semmer's book Remington Double Shotguns. It is invaluable if you are going to shoot, invest, collect or play in the Remington double gun field. Remington supplied a number of different pattern Damascus barrels on these old doubles. A picture of their salesman’s sample of the various styles of Damascus available is shown on page 275 of Semmer's book.

Remington Arms Co. stamped the actual pellet counts of their test patterns on the rear barrel lug of their Model 1889 hammer doubles and their Model 1894 and 1900 hammerless doubles. If the number is three digits, that is the count, if the number is two digits a leading 3 is implied. From surviving hang-tags we know the standard load they used to target 12-gauge guns was 1 1/4 ounces of #8 going 511 pellets to the load. My 12-gauge KE-Grade Model 1900 is stamped 33 on the left and 24 on the right. That would be 333/511 = 65% left and 324/511 = 64% right, or about improved modified in both barrels. The chokes measure .027" in both barrels of that gun.

By the end of the first decade of the 20th Century, Remington saw that the future laid with their John M. Browning designed Remington Autoloading Gun (later known as the Model 11) and their John D. Pedersen designed Remington Repeating Shotgun (later known as the Model 10). So, they concluded a deal with Norvell-Shapleigh Hardware Co. of St Louis, for their entire inventory of break-action shotguns in inventory and in process, on February 3, 1910. There must have been a lot of guns involved, because the records show 3206 Model 1894s, and 16435 Model 1900s shipped in 1910. The 1909 Remington Arms Co. catalogue was the last one to include the doubles, and there was a version of the 1909 catalogue that only had the Remington Autoloading Shotgun, the Remington Repeating Shotgun, and the Autoloading Repeating Rifle.

While the original production records for Remington doubles have not been found in the archives at Ilion, Charles produced a serial number chronology for his book from the available shipping records.
Top

If it were me buying the boat and motor combination in say 3 years, now Id be looking at a 5 year old motor. It may not make any difference to the dealer, but I think it really hurts the resale value, as youd look up the year by the serial number and see that 5 year old manufacture date. How much less is a used 3-year old motor worth vs a 5 year old motor?
Adorable Wallpapers
Top

Hello,
I inherited a Remington Model 1894 side by side shotgun and I think it's grade AE. The serial number is #105095
Can't find the book listed online, so can anyone possibly help me find out when this gun was manufactured?
It belonged to my Great Great Uncle who died in 1949.
Thank you,
Top

According to the serial number chronology assembled by Charles Semmer, 105095 would be an 1897 vintage shotgun.
Top
Post Reply
7 posts • Page 1 of 1

Users browsing this forum: No registered users and 4 guests