Hello,
I just purchased a Remington Mod. 1875 and I'm not sure what I realy have now. The frame and the triggerguard of the gun is nickel plated and the plating is in very good condition. Barrel and cylinder was blued and is turned gray now. The hammer still has lot of case colour and I think that there are traces of case colour on the web under the barrel also. The gun has real big ivory grips that fit perfect but seems to be after market. The caliber should be .44 Remington since .44-40 do not fit because of too large rim of the cartridge. The mechanic is crisp and functions perfect, only the main spring looks to me as if it is replaced by a Colt SAA spring. The only markings on the gun are the barrel address and the serial number 14159 under the grip on th elower part of the grip frame. I have completely disassembled the gun but didn't find any other marking. Most 19th century guns in my collection are from Colt and Winchester and there are always several markings on the guns that is why I'm so astonished to find nothing on the 1875 Remington.
My questions now are, did I pay a lot of money for a peace of junck or do I have a valuable gun? Did Remington offer this mixed finish with blue and nickel plating or is this an after market finish? What year is this gun build? Does Remington has a Historian where I can request informations, similar like Colt?

You see, I'm new in the field of collecting Remington guns and highly appreciate any information.

I hope the pictures will upload 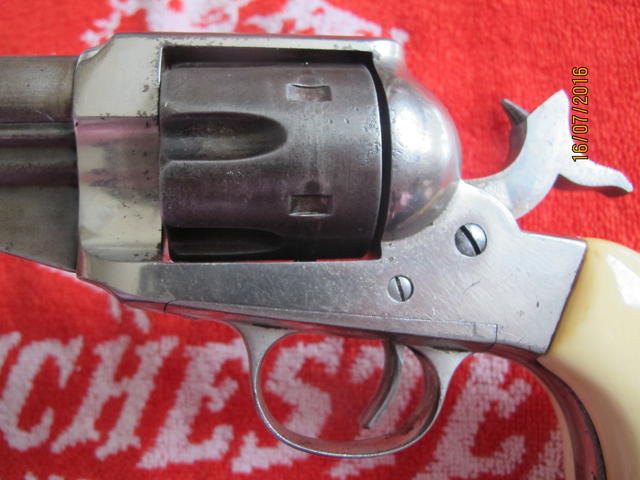 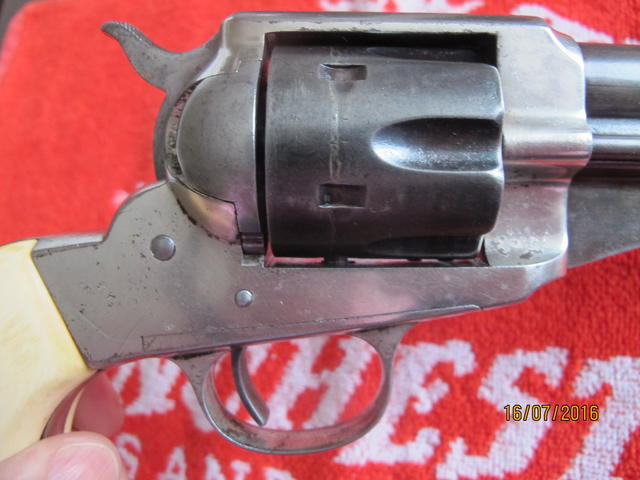 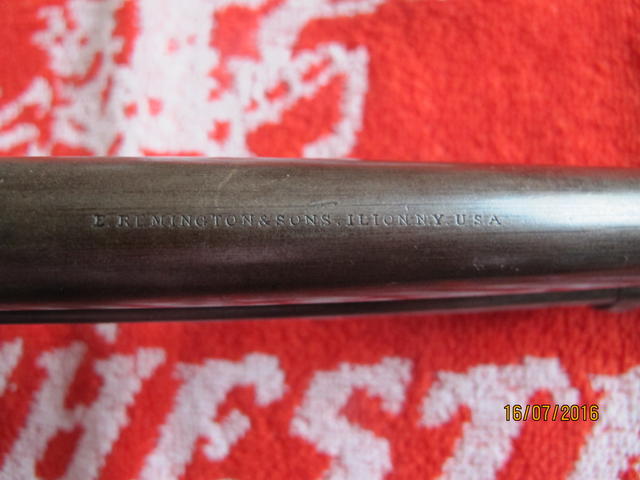 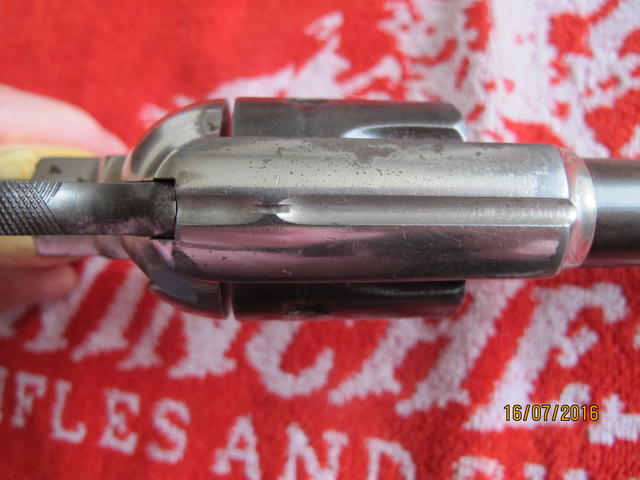 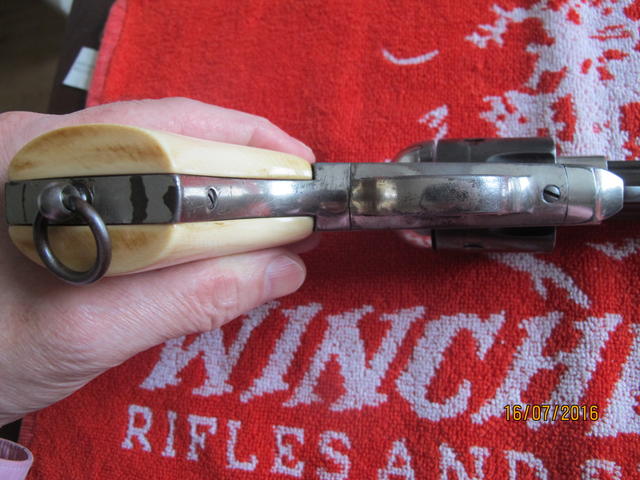 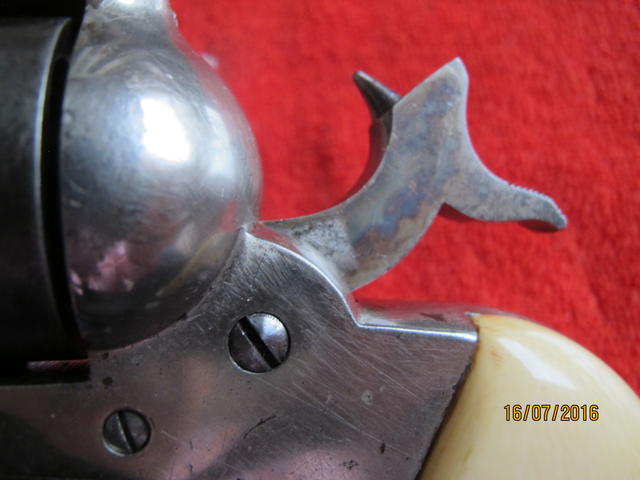 Hello Jack,
There should also be a serial number on the loading gate and on the trigger guard tab. Your revolver is one of the first 16,000 made, after that they were made in batches and the serial numbers do not exceed three digits. To my knowledge Remington did not offer a mixed finish model 1875 but they may have. I believe you revolver has an after market finish and the grips were changed at the same time. There is no information available as to what year an 1875 revolver was built by serial number and unfortunately there is no Remington Historian where you can request information.

I hope this helps,

thank you for your reply, which really is helpful.
After closer examination I found the last three digits of the serial number on the trigger guard tab but I didn't find anything on the loading gate. Concerning the mixed finish I would go with your judgment and also think that it was made after market together with the ivory grips. I know about nickeled 1875s which where provided to the Indian Police. Is that a correct information?
There are also rumors about a contract of 10,000 1875s for Egypt's army which was never fulfilled since Egypt didn't pay for supplied Rolling Block rifles. Do you have any information about this?
One last question, can you estimate the current value of my pistol in your country? I would like to know if I have paid a reasonable price. Since these guns show up very seldom here in Europe, especially in such good condition I paid quite a lot of money for it.

Can you recommend books or other literature, where I can find some more information about the 1875's?
Happy Trails
Texas Jack
SASS life # 55314
a.k.a. Kid O'Folliard
Top

There were 639 Model 1875’s purchased by the Commissioner of Indian Affairs to arm the Reservation Police. I believe these were all nickel plated. The Pine Ridge Reservation in South Dakota was the only Reservation to mark their revolvers. There was a contract for the Egyptian Government for 10,000 revolvers some of which were shipped to Egypt. These were finished in blue and were marked with a * on the left side of the frame in front of the cylinder and an R on the barrel where it joins the frame. We do not value guns on this site because it is difficult to judge values from pictures. I would check on http://www.gunbroker.com and http://www.gunsinternational.com and see what a comparable revolver is going for. To my knowledge there is no book written on Model 1875 Revolvers. There is however a fifteen page article in the 1st Quarter 2004 Remington Society Journal titled "Variations in Remington Model 1875 Model 1888 and Model 1890 Revolvers", which contains significant information on the three models.

Many Retailers back when used to offer both Gunsmithing and Finishing services, even as many Gunsmiths also offered Finishing/reFinishing or modification services, and, my guess is this is an old 'period' finish and likely was requested when the Revolver was purchased, and ditto with the Stocks.

Good looking old Remington! And indeed, it appears to be in very good condition with no signs of abuse or damage.

I would be very proud and delighted if it were mine.
Top

I know more about 1873 Colt single actions than 1875 Remingtons, but from years of experience with antique black powder cartridge weapons, I can tell you these truths:

1. The partial nickel finish is a very old and correct period nickel. Probably not factory but at that period it would have been considered better than factory.
2. The ivory grips are awesome and also old, high quality and correct for the period. Again, they were a better than factory addition at the time.
3. There is nothing "junk" about your revolver. IMO, it is a superior collectible.
Top

Texas Jack,
While your 1875 is all original Remington, it is composed of two different issues.
The frame with its high serial no. and round firing pin are from a later production.
While the barrel with the pinched front sight is from the earlier production.
My guess is the barrel, ejector, and cylinder (44Rem. cal.) are from another blue '75.
Having said all this, it's still a nice example of the 1875. Better than a lot of others I've seen, and have!
Top

This model was offered with only a plated frame, rest blue finish according to an article by Don Ware and posted here on this forum. It's a nice honest gun and those grips may have been factory, they charged more for pearl grips then ivory but they did offer them.
Mike
Top
Post Reply
9 posts • Page 1 of 1

Users browsing this forum: No registered users and 3 guests